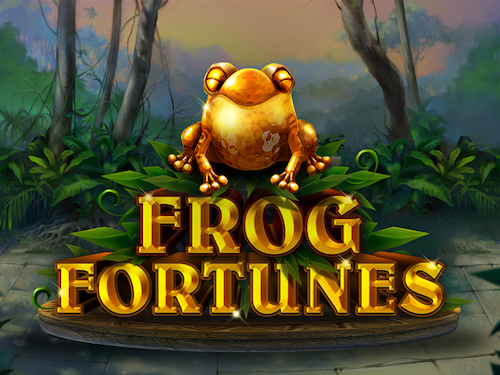 Frog Fortunes may sound like an odd title for a slot machine, but it perfectly encapsulates what this game is all about. This 5×3 slot with 20 paylines is about a frog and its never-ending treasures. This explains why the title offers progressive jackpots.

At first glance, it is evident that Frog Fortunes is a jungle-themed game. The jungle serves as the backdrop of the 5×3 grid and control panel. The symbols used are also inspired by the wilderness. What’s interesting is that the animal symbols are animated, giving the game a more interactive feel.

The background music that plays throughout the game has a tribal touch, enhancing the overall gaming experience. Instead of spinning, the reels remain static while the symbols just pop up randomly. The animation for the matching symbols is enhanced by the perky sound effects.

Frog Fortunes operates like a standard slot machine aside from the part where the reels do not really spin and the symbols just emerge on them at random. The reels are also intentionally designed to be honeycomb-shaped to give the slot a more exotic feel.

In this game, all symbols pay from left to right. Aside from the standard symbols, there are special ones that are capable of exploding once they see their match. When an explosion is triggered, you can expect to see cash prizes come your way. The winning symbols disappear in the process, but new ones will take over to possibly form more winning combos.

For each line in the 20 paylines of the game, players can stake between 0.01 and 1.00 coins. This means the betting range starts at 0.20 and ends at 20.00 on any spin. Since this is an RTG title, there is an Autoplay option that will let you sit back and enjoy the game without lifting a finger.

Frog Fortunes does not really focus on wilds and scatters since it has special features that make the game interesting. First is the Cascading Reels Feature that can be activated only after an Exploding symbol appears and combusts its neighboring symbols to give way for more matching combinations.

The game has a variety of symbols, including purple eagles, green reptiles, red frogs, yellow mammals, blue diamonds, green gems, pink gems, and red gems. You’d know if you have an Exploding symbol on the reels if you stumble upon a ticking bomb. You don’t need to do anything when it shows up because the Exploding symbol is timed. It will automatically burst into flames and carry with it similar symbols that form a pattern.